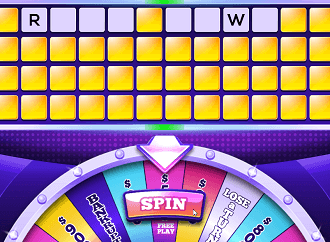 Ready to play Wheel of Fortune online for free? This replica of the TV game show trains memory, concentration, and analytical ability.

The HTML5 version, Wheel of Rewards, is an HTML5 game. It does not require the Adobe Flash player.

If you like this game, you might also enjoy the other free word games on this site, such as Cryptogram Puzzles, and Spiderman Web of Words.

Wait for the game to load, then click on the wheel to begin. Spin the wheel to determine the point value for each turn. After spinning select from the letter board.

HOW TO PLAY. If the letter appears at least once in the hidden puzzle phrase, you get points. On any turn, you can also buy a vowel.

In this version of Wheel of Fortune, you must solve the puzzle completely by selecting letters (you can't "solve" the phrase if there are still blanks).

Score, bonus, round score, and total score are displayed along the left. The point value of the current turn is shown in the angled box on the left.

Play Wheel of Fortune online for three rounds and see how high a score you can get. When you are finished, click the Reset button to start over with three new rounds of phrases.

A CORRECTION. An astute visitor brought to my attention an error in one of the Wheel of Fortune puzzles. According to Leah C.,

Dont Worry Be Happy is by Bobby McFerrin not Bob Marley. The confusion may stem from the fact that Bob Marley did a song called Three Little Birds that said "don't worry about a thing" in the chorus.

Many thanks to Leah for pointing that out.

Fun Facts About Wheel of Fortune My high score in Wheel of Fortune

It's fun to play Wheel of Fortune online without the pressure of being on TV. I hope you enjoyed it!