If you like Bob the Robber, you might enjoy the other free platform puzzlers on this site, such as the Vex Games, Snail Bob's adventures, and Fireboy and Watergirl.

He trained hard for years to learn his trade. After years of practice Bob decided to sneak into the casino and steal the treasures.

Episode 2: Bob The Robber has to protect the city! This bandit is the only one who can save the day.

In Bob The Robber 2 you have to sneak into buildings, avoid cameras, pick locks, take out guards, and watch out for zombies.

Episode 3: Bob joins the good guys to fight against an international conspiracy. Only you can help him.

Episode 4-1: Bob is back for another great adventure, this time in the beautiful city of Paris.

Episode 4-2: Enjoy this whole new release of the Bob The Robber thief game, as Bob heads to Russia, with plenty of new challenging levels.

Episode 4-3: Bob The Robber is back, and this time to mysterious Japan. These are the toughest missions yet - good luck beating them all.

Episode 5: Join Bob on a new adventure in Bob The Robber 5 - Temple Adventure. Steal the treasure from the temple. Knock out guards, take out mummies, and don't get caught by the eyes of the statues.

HOW TO PLAY. The object of Bob the Robber is to make it safely through each level without getting caught, while finding treasures and defeating opponents and obstacles.

As you start each level, look for the objective first so you know where to head. After you've achieved the goal, you'll need to then escape the level.

But don't get caught! If you're caught, you're busted and lose the level. You'll have to re-do the level if this happens.

Movement. Use the WASD keys or the Arrow keys to move Bob and interact with objects in this Bob the Robber thief game. To go up stairs, press the W key or Up Arrow key. 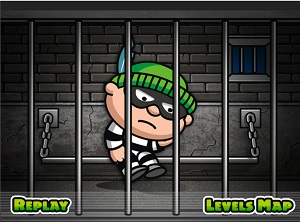 When you see a paper tacked to the wall, stand in front of the paper and press the W key or Up Arrow key to read what's written.

To search boxes, cabinets, and other areas, stand in front of the area and press the W key or Up Arrow key. Besides the main task, there are lots of extras to find on each level.

You'll find a lot of doors. Some of them will be locked. To pick the lock, stand in front of the door and hold down the W key or Up Arrow key until the lock is picked. Then you can pass through the door.

Some of the doors have a code lock. Press the W key or Up Arrow key while standing in front of the code panel. Then press the 0 through 9 keys on the panel (enter the correct code) to unlock the door.

All robbers prefer being in the shadows. When still, Bob will hide himself in a shadow and the cameras won't see him.

There are laser barriers on some levels. The alarm will sound if you pass through. To disable the barrier you must rewire the electrical control unit. Press and hold the W key or Up Arrow key to do this. 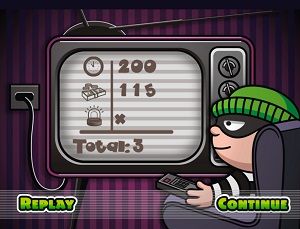 There are many other challenges in the different episodes and levels. Good luck!

Screen Features. A clock on the screen indicates how much time has elapsed since you started the level. The stack of cash shows how many valuables Bob has found.

There are also option buttons for re-starting the level, pausing the game, and muting the sound effects and/or theme music.

On the screen are a series of alarms. If all the alarms get lit (from Bob being seen), he will be "caught" and fail the level.

Puzzle platform games like this Bob the Robber thief game train important brain skills including problem solving, thinking speed, and mental flexibility. Play games like this often to give your brain a boost!