Welcome to the online Snakes and Ladders game! Play this game single-player against the computer or multiplayer against real people. Did you know the Snakes and Ladders board game goes back more than 2,000 years? It was used originally in India, England, and elsewhere as an educational device, to teach life lessons and morality. See below for more on this.

The two versions follow the same rules. The only difference is that Snakes and Ladders is the ancient theme for the game. The playground theme with children, ladders, and chutes (slides) was introduced in the US in the 1940's.

HOW TO PLAY. The object of Snakes and Ladders (and Chutes and Ladders) is to be the first player to reach Square 100, the top left square on the board. Number of Players. When you open the online Snakes and Ladders game, first choose whether you want to play against the computer, another person on the same computer as you, or in multiplayer mode against either random opponents from around the world or against a friend on another computer. (See here for multiplayer instructions.)

Board Layout. The Snakes and Ladders board is a grid comprised of 10 rows of 10 square per row. Thus, there are 100 squares on the board, each of which are numbered, from 1 to 100, starting in the lower left corner.

The board is numbered in horizontal switchback back-and-forth rows, also known an ox-plow or boustrophedon pattern. The first row begins at Square 1 in the lower left and runs horizontally to the right.

When the right side of the board is reached at Square 10, the player moves straight up to Square 11, the start of the second row. The second row goes from right to left, the third row left to right, and so on. 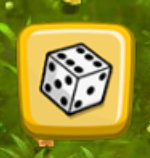 Moving Your Piece. Movement in Snakes and Ladders is horizontally along the rows as described above. Move your piece through the board using the roll of a single number cube (also called dice or a "die") to determine the number of squares to move. When it's your turn, click the number cube icon in the lower right of the board to roll the dice. Your game piece will then move automatically.

Rule of 6's. Taking turns, each player moves their piece the number of spaces rolled on the number cube. Whenever a 6 is rolled, that player gets an extra roll and can move again. When you roll a 6, the game makes the additional roll for you automatically.

The Last Few Squares. The way the last few squares as you approach Square 100 are handled varies in different versions of Snakes and Ladders.

This is best illustrated by an example. Suppose your game piece is on Square 97. If you roll a 3, then you will land exactly on Square 100 and win the game.

However, if you roll anything above a 3, you will overshoot the Square 100 and not win the game. Rather, you'll bounce back to the right by the subtracted difference.

To win, you need to roll the exact number of moves that would land you on Square 100.

While testing and researching this online Snakes and Ladders game, I was surprised to learn the Snakes & Ladders board game goes way back in time. And I mean way back. It has been played since at least the 2nd century BC in India. That's over 20 centuries!

The appeal of Snakes and Ladders through most of history has been the weaving into this game of morality and life lessons, believe it or not. According to the Forgotten Toy Shop, the game's original name was Moksha Patamu. It was known as Leela, the divine game or knowledge game.

Why divine? The game's nickname in Victorian England (the mid-to-late 1800's) gives a clue. It was referred to as the Ladder of Salvation.

Through its variations during the course of history, until modern times, the point of the game has been to teach "right and wrong". In earlier times, Snakes and Ladders was a regular part of children's education.

The game was used to teach the spiritual rewards of right action and negative consequences of wrong action. The game was a means of introspection rather than competition.

According to the Snakes and Ladders section of The Boardgame Book (a book that describes ancient and unusual board games), the virtues included in the original Indian version of the game included Faith, Reliability, Generosity, Knowledge, and Asceticism. The vices were Disobedience, Vanity, Vulgarity, Theft, Lying, Drunkenness, Debt, Murder, Rage, Greed, Pride, and Lust.

Reaching the 100th square at the top left corner of the board represented the personal achievement of Enlightenment in Hindu versions of the game. In early Christian versions of Snakes and Ladders, the moral lessons included avoiding sin and practicing virtue. Reaching Square 100 meant achieving Salvation. The overall game is meant to reflect the spiritual purpose of our lives.

In Western countries today, the moral lessons are no longer represented in the game. Even the snakes are missing from some versions, replaced by playground slides and themes (thus the alternate title, Chutes and Ladders). While the online Snakes and Ladders game here is certainly fun to play, it obviously lacks the depth intended by those who created the original game centuries ago.

When Milton Bradley started selling this board game in the 1940's they swapped out snakes for Chutes. Supposedly children at the time in the US had reacted negatively to the idea of playing a game with snakes in it.

Most Snakes Are Not Bad This has nothing to do with the online Snakes and Ladders game, but as an aside, I appreciate snakes. I treat them well and try to rescue the harmless ones from fearful humans whenever I can.

Most snake species are non-venomous and beneficial to people and the environment. It helps to learn to recognize dangerous venomous snake species in your area, which you can easily do through a quick Google search. Unless you live in the Amazon jungle, there won't be more than a handful of venomous types.

The recommended best strategy is to avoid snakes when you encounter them. Please do not kill non-venomous snakes just because you think snakes are creepy. Snakes are living creatures like any other, so let the harmless ones be.

Non-venomous snakes are your friends. They provide important benefits, not the least of which is free pest control.

Loss of the Morality Lesson

In a certain way, I'm sorry the morality dimension was removed from Snakes and Ladders. That actions have consequences is an important lesson everyone has to learn eventually. So is the concept of spiritual growth through right action, and that bad things happen through wrong action.

In my humble opinion, the sooner a person learns these truths, the more satisfied and content they will become. To help children grasp these concepts by playing a fun board game was a genius insight by the ancients that in our modern so-called "wisdom" we have discarded.

Surprisingly, there seems to be renewed interest in this in some quarters. For example, in Mumbai the gaming group TableTop India has reintroduced the original morality version of Snakes and Ladders (also called Gyan Chaupar), a version in which "winning isn’t the point. History, philosophy, mysticism, and life lessons":

The squares – between 72 and 124 in number – are symbolic of the journey of life. Each square represents a positive or negative choice or its consequence. Being bitten repeatedly by a certain snake, vice, for example, should encourage a player to introspect on his own weaknesses in life. Conversely, an easy passage to Vaikuntha (Vishnu’s abode) or Allah’s throne, as the case may be, would highlight the importance of morality in life.

As you play this online Snakes and Ladders game, I challenge you to sometimes consider the moral lessons that were the foundation of the original board game. Consider that selfless good behavior helps you grow as a person and makes the world a better place. Conversely, selfish and harmful deeds and emotions stall your growth, limit your potential, and lead to stress and suffering.

Board games like this free online Snakes and Ladders game train important brain skills including attention, visual perception, and pattern recognition. Play games like these often to give your brain a boost!