Gaps Solitaire is an variation of solitaire where you fill in holes in the pattern as you try to get the cards into proper sequence.

Solitaire card games train concentration and logical thinking. I found this version of solitaire puzzling at first and a bit tricky to master.

If you usually play regular solitaire but want to try something different and challenging, then definitely give Gaps Solitaire a try. If you like this game, you might also enjoy the other Free Online Solitaire Games on my site.

HOW TO PLAY.  This version of solitaire is played with a single deck of cards with the Aces removed.

The object of this game is to re-order the shuffled cards into 4 horizontal rows, from Deuce (2 card) on up.

Unlike other solitaire games where the cards are layed vertically on the board, in Gaps the cards are oriented horizontally, in four rows by suit.

The missing Aces create the "gaps" or holes in the pattern. You use these gaps to move cards around the board.

As with all other solitaire card games, Gaps begins with the cards shuffled randomly. Your intial goal is to get each of the four Deuces into the first slot on the left end of each row.

After that, keep re-arranging the cards until each row contains only one suit in order from Deuce to King. When you are done, the last position in the row will be a gap.

To move a card, simply drag and drop the card with the mouse. However, you cannot move a given card to just any open gap. You can only move a card to a gap where the card to the left of the gap is the next lower card of the same suit. 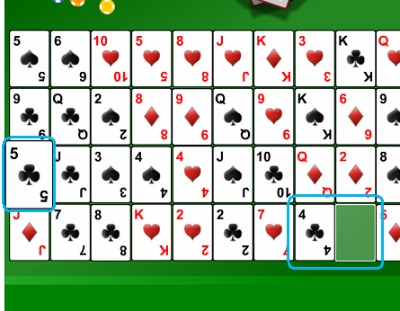 Gaps Solitaire example move (at left). To get the 5 of Clubs out of the first position on Row 3, click the gap to the right of the 4 of Clubs.

This moves the 5 of Clubs to the gap. (Or you can drag the card there with the mouse if you wish.)

With the 5 of Clubs out of the way, you can now move a deuce to the first position on Row 3. To quickly find which card can be moved into a particular gap, hover your mouse cursor over the empty gap slot.

In some versions of Gaps Solitaire, you can build down from the right hand card as well as building up from the left hand card. However, in this version you can only build up.

At some point you may run into a roadblock where there are no valid moves left. Click the "Shuffle" button to reshuffle all cards that are not yet in order.

You get 5 reshuffles per game, and the "Retries" bar shows how many reshuffles remain.

There is also a "Score" box on the upper left that shows how many points you earned during the current hand.

If you are still a bit confused about how to play this solitaire game, go to the Menu screen and click the Instructions link for a short animated tutorial.